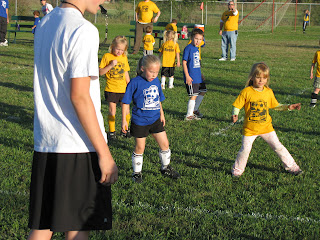 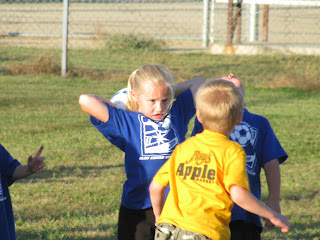 I told you it might be every once in a while that I would update and I was true to my word. On Tuesday night Maddison had a soccer game. She is really enjoying it. She is one of the older ones on her team so that makes the majority of team 4-5 year olds. This has taught her and myself a little more patience as some don't really know what is going on. So between me yelling at the kids to kick the ball "the other way" and "please get your head out of the net, your not the goalie" Maddison has done very well. She has only managed to hurt two kids, one she kicked the ball right in his face and the other was throwing the ball in and hit someone in the arm. She does feel bad and apologizes right away. Brent says, "no need to apologize that's part of the game" Garrett is pretty funny to watch also as he gets a little excited when Maddison scores. I enjoy hearing him say, "that's my sister". Although if you ask him..."her games are so boring". He doesn't have to worry about him being bored much longer she only has 1 game left, maybe 2 if we make up a game that got canceled due to rain.