The Easter Bunny came early to our house.
He ( I think, maybe a she), brought itself and apparently is staying awhile! 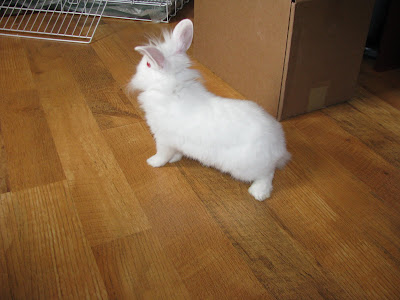 Brent's boss Mike was so ever kind and brought our family this little addition.  Complete with all the "fixings'.  We have the cage, food, water bottle, and the bedding. 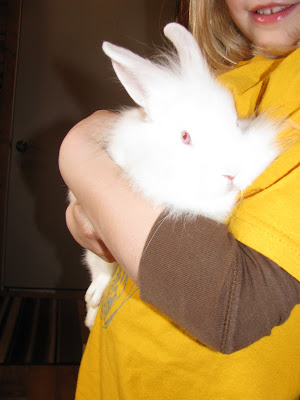 When we moved to the country Maddison was 18 months.  It was soon after that she asked for her first pet.  We said NO.  From then until now, we have been asked, told, requested of a dog, cat, hamster, horse, cow, pig, chicken, guinea pig and yes even a rabbit.
Maddison was in 7th heaven.  Literally.  Her reaction was priceless.  OUR reaction was priceless as we didn't know we were having a full time occupant until 4:30 yesterday afternoon. 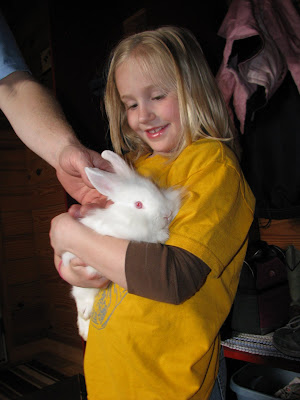 As excited as Maddison was, the boys weren't so sure.  Garrett just isn't a huge animal person.  Owen loves animals, but apparently not Fluffballs.  All he kept saying was:
"put in cage, put in cage".  Apparently cows are still going to be his thing. 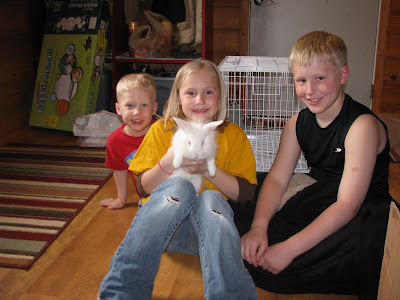 I guess you could say we Maddison is officially a  "pet"owners,
Oh, no name has been decided on.  As of last night at 10:30 it was between Snuggles and Fluffy.. How original I know!
Posted by The 5 C's at 7:21 AM 1 comment:

I have a confession.  I'm a grumpy gus on April Fool's Day.  I really see no humor in this holdiay at all.  Sorry to all you hardcore holiday celebrators, but this makes no sense.  I don't know who, what, when, or why this day even occurs, and I really don't care, BUT I have children who think this is a great day

So in the spirit of April Fool's Day we made a snack for Maddie's class tomorrow.  Bacon and Eggs.  It is really really easy and its not much, but I will admit, I thought they turned out rather cute and look something like Bacon and Eggs. 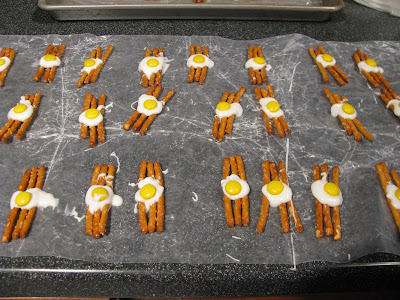 A little closer...sorry lighting was so great in my kitchen tonight. 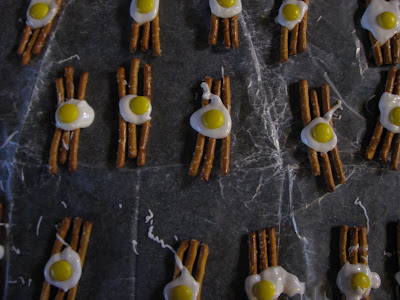 Ingredients: pretzel sticks, vanilla almond bark melted, and yellow candies.  We used reese's pieces, but could use m & m's or skittles.
Put 3 pretzel sticks together, add a dollop of chocolate, and add yellow candy on top.
Posted by The 5 C's at 9:07 PM 4 comments:

Its A Boy or a Girl or

A Big Green Tractor.  This tractor is the latest addition to our shed.   Home.  I will have to say Brent has been wanting something like this for awhile, but tractors in general are not cheap.  He bought this at an auction last Friday.  It's a little rough and needs some work, but it did make it the 11 miles home with no problems.  He tells me there are all sorts of possibilities for the tractor.... 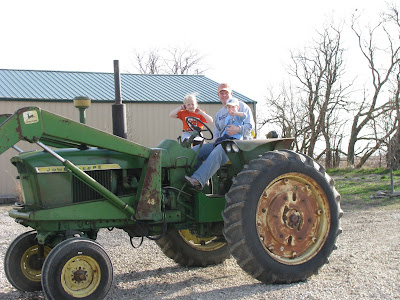 Owen was just beside himself.  You all really have no idea how hooked this kid is on tractors!  Here he is practicing his farmer wave! 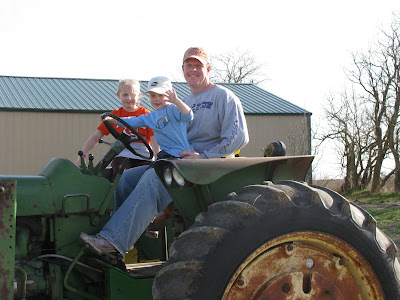 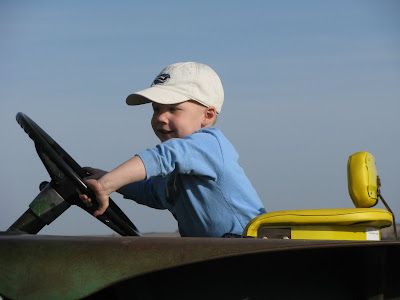 PS-Brent did tell me last night that it when he is scraping the grease of  this tractor it makes him smile knowing its all his. Only God understands what can make a man smile!
A quick note. Garrett was sick yesterday so he was unable to attend this photo shoot.  But he is just as excited as the other two gentlemen in the home.  This might be a really good bonding experience.  Now if only Brent wouldn't work on it when its the kids' bedtime.  (I think he does that on purpose!)
Posted by The 5 C's at 9:00 PM 1 comment:

I think spring has definately sprung! Yesterday was awesome. Sunny and warm. Could actually go for a quick run without hat and gloves! Thinking I might get out my new cushions and take a break this pm and read outside.

This weekend Garrett and Maddison had their first 3 on 3 soccer games. They each played 2 games on Sunday. (I'm not thrilled that they are on Sunday, but 2 out of the 5 games are on Saturdays AND they only play 5 weeks and then season is over) The kids have not done any extracurricular stuff since last fall which happened to be soccer. Ok..back to the games. Both did really well and both scored some goals. The rules are a little different and they run A LOT. (which is good for them, considering the little physical exercise we got over the LONG winter) There is no goalie and only 6 people on the entire field at a time. Sub in an out a lot. AND they only play 2 12 minute halves with only a 2 minute halftime. The bad thing is there are so many kids and other games that there is some waiting around in between games, but it does help that Maddie and Garrett never play at the same time and that helps the time go when you are watching someone. And they start ON TIME if not a minute or 2 early so you have to be ready to play. Weather was great on Sunday and the kids actually got a little pink. Will definately need to remember sunscreen. Thinking its time to start getting together our "summer box" together to leave in the van.

Garrett scoring his goal. And yes that is his obnoxious mother yelling! Sorry...kinda forgot I was taping. (not that it would stop me) How can some moms and dads NOT say a word?????? 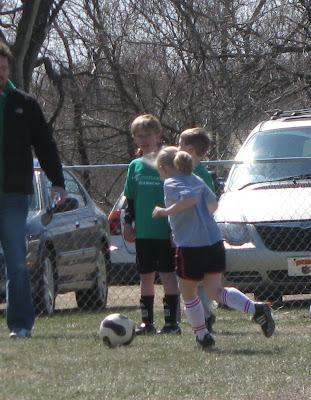 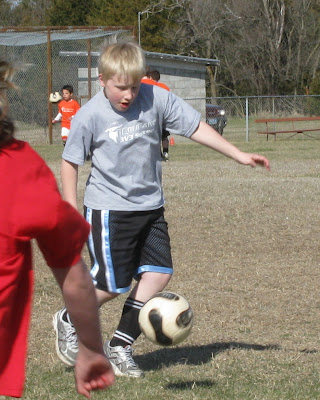 Owen wanted to be in on the action too!  He did really well considering no nap, but a movie in the van and 2 cheese sticks later and some twizlers he was good to go again! 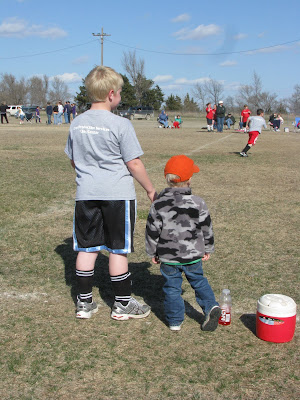