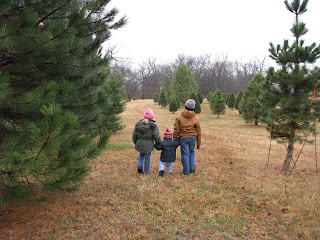 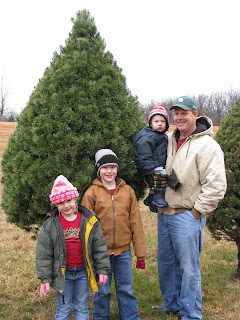 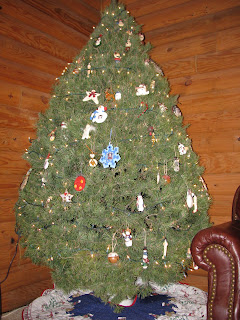 Finished! (Yes there is a star at the top, sorry)
Every year we get a real Christmas tree. For several years we went to a little old lady in Green who used to have a tree farm. The early years were a little hard to find a tree but still managed to find one, but as the years went on (and she hadn't planted any new ones in years) the pickings were getting a little slim. So last year Brent called around and found some tree, but we didn't go w/to pick out. Which was fine, because Owen was only 6 months old then. Well this year I called around to a few places and Christmas Trees are just plain expensive if you ask me. Saturday morning was yucky to say the least. I was ready to call off Christmas Tree hunting unless we were going to go find a fake one. But my brother in law Rex bailed us out by telling us that he knew of a couple down by Talmage that had started a tree farm several years ago. He couldn't promise us how many trees or what they looked like. We gave it a shot. We bundled up w/boots, hats, gloves, heavy coats and sweated our way to Talmage. It was snowing/raining pretty decent by then. Owen fell asleep on the way. We thought about leaving him in the truck while we looked, but I said no because that would have really messed up afternoon nap time. The couple was very nice and found one right off.For only 20 bucks. Yes we still payed for gas, but the family time was so worth it!!! So here are some pics of our yearly tree find! Kids were excited and Garrett thinks the thing grew on the way home. He complained the whole time that he thought it was too short. But once it was up in the house it was "just the right size".
Tis the Season to be jolly!

Erica - that first picture is GREAT! They look like such well behaved, loving siblings! :)

I loved that picture, too! VERY sweet...not near the Norman Rockwell picture of my husband cursing over the assembly of our prelit plastic glory for an hour and a half...