First Royals Game of the Year

On Friday afternoon we headed to the KC Royals game to watch them and check out the newly remodeled stadium. There were THREE highlights of the night. We got to see LC BOOM BOOM. She is EVERYTHING and MORE in person than her blog says. She is absolutely wonderful and precious. Two-Zach Grienke pitched a complete game and Three-The Royals one. But there were more than three LOWLIGHTS of the evening. But the main one was we spent 2/3 of the game standing in line. I know I mentioned before that we don't normally get food at the games, but because it was buck night I knew that we would eat some supper there. We also had tickets that had 1o dollars credit to be used for merchandise or concessions. So I am thinking we are going to be fine. WRONG! The lines were absolutely, totally, ridicously LONG, LONG, LONG. I am not a patient person and fighting people/crowds and lines are not my strong suit especially w/hungry, hot, tired children in tow. Bless the kiddos hearts, they were actually more patient than either Brent or I. Because it was buck night and the lines were so long people were ordering 10 or 15 hotdogs at one time. So the line did not move...I stood in line a LONG time at some side vendor wanting to use my credit for some snowcones only to have the guy tell me those don't work w/him he only takes CASH..Are you kidding? EVERY vendor that I saw was taking these things and had the kids not already grabbed the snowcones and started eating did I pay for them in cash. Yep, still have my credit. So we weave our way through lines w/snowcones spilling, and juice running over and go sit 10 rows from the TOP. We maybe watch an inning. By this time its around the 8th inning and we have to use this credit by the end of the night. I think the lines will be shorter since the game is almost over. So we head back down and stand in line some more and more. The line was not moving and I said to the kids what if we went and bought some merchandise. They said the could skip the nachos. So we got 2 royals baseballs and maddie a pink bat. As we are standing in line AGAIN. The game ends. So I missed the last 2 innings. We did see Brents cousin Kyle who graciously gave garrett 10 more dollars in credit and we came home w/some foam claw. As we are getting ready to pay (next in line) they come over the loud speaker saying that the Fireworks are canceled because of HIGH winds. Why should I not be surprised? We finally made it back to our van said goodbye to LC Boom BOom and family and came home. (yes, we skipped staying at my brothers-no one was in the mood-we just wanted to get home) Brent said on the way home that sitting in our basement w/hi-def and surround sound sitting in his chair we have probably been better. Not saying that we won't go back, but not for awhile! 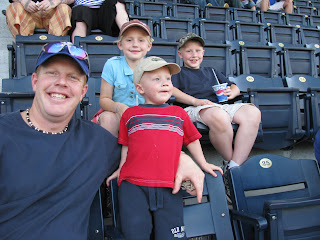 We agree! We enjoy the games much more from home---and our kids are OLD!
That standing in line can kill a persons spirit faster than anything.