When we first built our house we just built the main part and then after we moved in we built on the garage and the mudroom. Wow was it nice when it was done, because walking on plywood up to the door carrying groceries while it was muddy and raining was not fun! While building it the garage that was framed and had tresses up blew completely over in a bad summer storm. Looked like dominos. Brent and I still don't sleep so hot when the wind start blowing THAT hard.
Anyway we hurried to get it done. Soo..I begged brent to build me these lockers so I could be ORGANIZED. Oh and I should say that when these were built we only had 2 kids! You all know my story of the 3rd. So for now O shares G & M's locker. For the most part it worked, and to be honest and Brent would/will admit HIS locker is the messiest. He is a hoarder of "things" that he might use or wear. But after living here awhile we (I) wanted a different floor. The indoor outdoor carpet thing wasn't working out so well. I should admit it was probably more me leaning towards the carpet in the first place. I will admit I am not a huge fan of wood floors. I think they are cold and little uninviting, but after living here almost 5 years and having 75% of the house carpet, I am finding that having stains on your carpet can be uninviting as well. So all in all its a toss up.
SOOOO while doing the basement room downstairs we decided to redo the floor in the mudroom. I also bought some better red paint and repainted the lockers. Here are some before shots. I thought I had wrote on the pics to show you, but apparently that didn't take. I will say that Brent's locker (closest to the white door) looks WAY better in the pic than normal. He already cleared stuff out before I could take the pic! 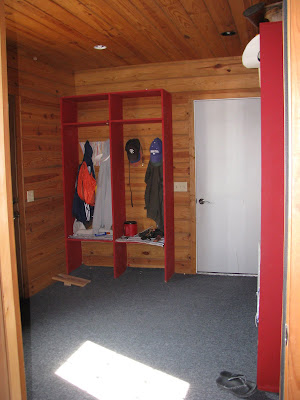 Daddy and His Elf's 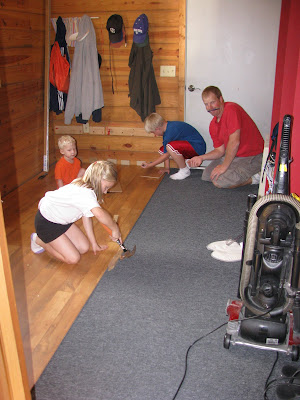 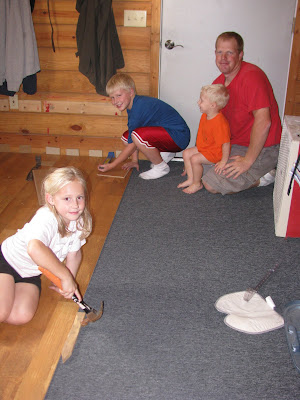 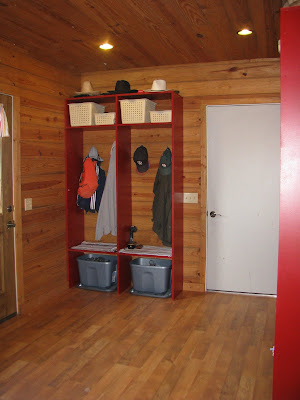 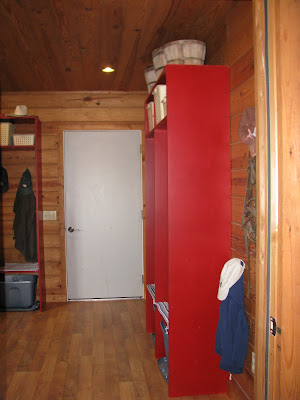 I still need to find a couple of rugs and/or runners to wipe feet off. Problem is they need to serve a specifc purpose AND I would like them to be CHEAP AND I would like to LIKE them. Sometimes that combo is hard to find! 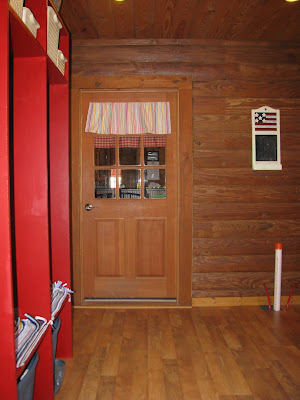 The pipe sticking out is for a SINK. I am soooooo tired of my regular bathroom sink and good towels being used as a dirt trough. We have an idea we would like to try, but we are finding that idea a little hard as well. I will let you know if we get that taken care of. I know that the blue tubs and cream baskets aren't real "fashionable", but I hadn't been able to find anything that caught my eye and what did didn't fit or was WAY more than I was willing to pay. So until I can find something else this is what we have. The small cream basket has hats and gloves and the bigger cream basket has misc. outdoor stuff. Bug spray, ball hats and gloves, bubbles, sidewalk chalk and little of whatever can be shoved in there! 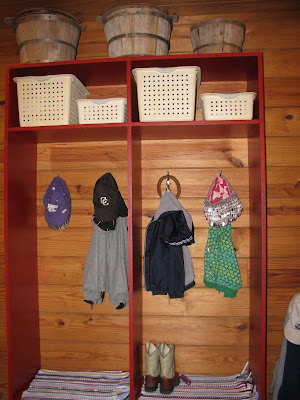 There is one wall opposite the kids locker that is free so I might try and find a bench or chair. It all depends on how big the sink is going to be too.
Oh I should mention too that I washed the rag rugs so everything would be clean and of course they all frayed on one end..Sigh...one more finish job...oh I wasssssssss sooooooooooo close to marking this job "COMPLETELY DONE"
Posted by The 5 C's at 12:48 PM

The new floor makes it look so much bigger!!!

that looks great!!! and who cares (other than you ;) ) about the baskets/totes?! it's a mud room! ...but you could always slip cover them...here's a good tutorial for crates that I'm sure you could change for this:
http://lauragunn.typepad.com/paintinmyhair/2008/09/post-1.html

justin is in such trouble...i've been bugging him about our floors and now i check in to see a first grader doing the job. Looks like I'm hiring out...Garrett, Maddison...what's your hourly rate?