Sooooo...this is who are family life is revolving around lately. 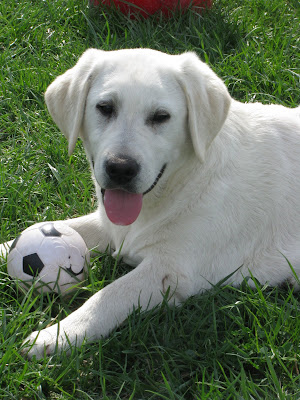 This is what Lucky does pretty much all morning...He and Owen have become really good buddies.  It's actually worked our rather nicely to have Lucky.  He occupies some of O's time outside.  Believe me, I would MUCH rather be OUTSIDE than INSIDE, but somedays you just can't.  Lucky hasn't been hit by a ball or bat (yet), and he does shag some balls and seems to know when to stay out of O's way. 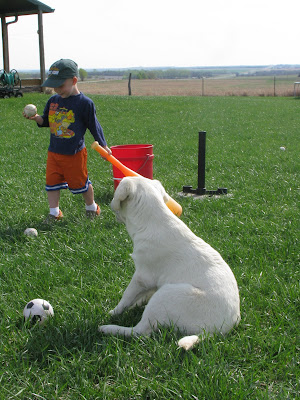 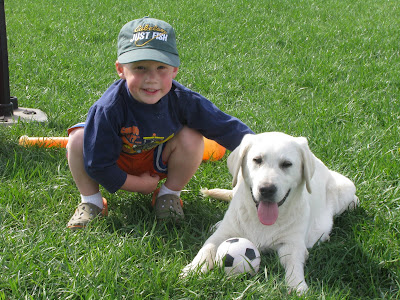 One evening last week we took Lucky on his first big walk.  We weren't sure how his leg/paw would hold up, but he seemed to hold his own.  He was a little slow, but no slower than O, who was picking up every stinking stick/cattle prod you could find.  I'm afraid Lucky might start thinking he is a cow if O keeps that up!  Taking a break at the pond. 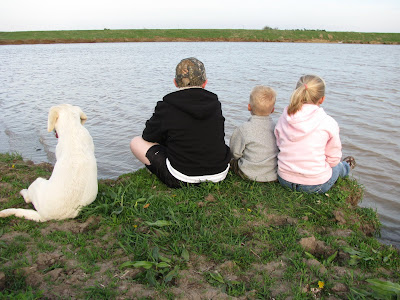 As far as we know this is Lucky's first swimming expedition.  Acutally it was more like getting his feet wet, but he seemed to enjoy it. 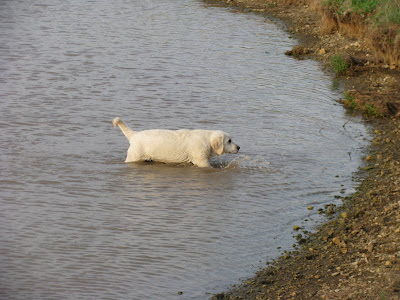 Lucky has been petty good.  He doesn't whine or scratch at the door.  He has drug a few rubber boots and ball gloves out, but hasn't actually done any damage (yet!).  However the night it rained, it refused to go to the shed, doghouse, or even into the garage AND he won't eat or drink unless we are standing right next to him.  Which is fine for now, but when it gets hot, I'm hoping he will get a drink on his own.  Any comments or suggestions on the eating/drinking part, would be greatly appreciated!
As for us humans, the kids have their last soccer games on Sunday afternoon.  We then have a couple of weeks before softball and maybe baseball (G's still not sure if he wants to play) starts up.  I've been working on VBS stuff and Brent has been doing odds n ends around here.   We are headed to Sears tonight to pick up our new mower!  WhoooHooo.  I really do like to mow, so hoping this mower will be great!

New mower? What happened to the "old" mower? Break down?

Brent decided it was time to upgrade. Sold the old one.

I love the pic of the 3 kids & Lucky sitting by the pond! Frame it!

Nice blog you got here... Just droppin' by to say hi! http://www.arts-and-entertainment.info