First, let me just say, I wasn't sure I was going to post this as I didn't need any more blonde comments, but then I decided I should be able to laugh at myself and really it isn't THAT bad. Ok..now the story
Ever since we moved I have tried to have a garden, but when you build a house in the middle of a pasture, "garden rich" soil just doesn't appear in the pasture. So for the last 2 years, I have tried to fertilize and weed to get a rich soil. And for the last 2 years I have managed to get things to grow. They start off fine, and even do great mid-way, then everything stunts out. I mean my corn starts getting husks at 2-3 ft and I get mini corn (yes like the appetizer kind, but not edible), I get cherry tomatoes, but they don't turn red. Ok so you get my drift. Well, THIS year my garden actually started out really well, and the good LORD has sent enough rain our way at just the right times, that I've only had to water a couple of times. This year I've tried to grow my normal potatoes, onions, tomotoes, zucchini, lettuce and corn. Plus I bought one strawberry plant and some green beans. Everything looks good minus the weeds (because of the good LORD as well). Actually this years corn looks better than any other than I've ever had. Doing good, green, not dry, good height in spite of the fact I was a couple of weeks late in planting. Last week we had a pretty good rain storm w/a lot of wind that pretty much layed the corn on the ground, grrrrrr. But by the next day perking back up and 3 days later good as new (or so I thought). Usually every other morning I go check it out and couldn't believe my eyes when I saw one of my rows was completely eaten in half. I mean the stalks were half eaten. 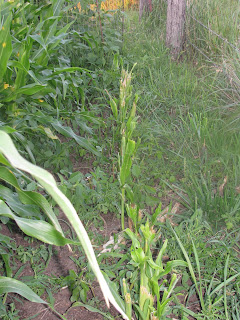 Stalks eaten off to the ground and 2nd row half eaten in parts. 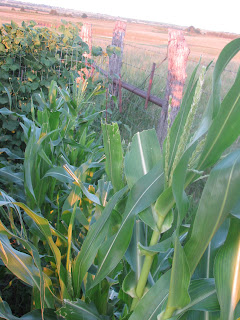 All I kept thinking was how my dad who is like a master gardner was having a terrible time with racoons. So the next morning went out and my middle row was eaten in parts and the first row was completely eaten to the ground. Brent (who hadn't looked at the corn) suggested a live trap. I was mad and wanted them gone, but didn't want to deal w/a trap so said no.

So on Sunday we had Garrett's bday party and I took my dad out right away to show him and ask him his thoughts. I said " So do I have coons?" He just looked at the corn, then at me and said "No, you have "COWS". 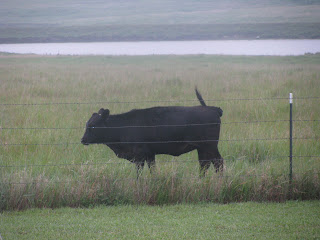 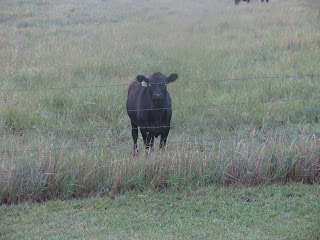 Go ahead and laugh. He did along w/the rest of my family...Never ever thought cows would be to blame. The cows apparently got a taste of the corn when it was laying on the ground from that storm. It must have gone through the fence where they were eating and the row that was eaten was right along the pasture fence. Never, Never, have I had this occur w/my garden. That means one of two things: my garden wasn't even edible for the cows or I've been plain lucky. The 3rd row is done. 2nd row parts my come out of it, 1st row-the row that can't reach is looking fine.

That is too funny! Thanks for sharing. Hope to see you sometime soon!