Seven Falls- This place was a little disappointing for me as I THOUGHT (shows you how much I know) that there were seven DIFFERENT Falls throughout the park that you could hike/walk to you. That would be a BIG no. So I saw where there were seven "little falls" all on the big one. The funnest part about this was walking up all the stairs. We did it and it was fun. Kudos to Brent for carrying O up and down ALL the stairs. Pictures are backwards. Sorry, might want to start at the bottom of post and work your way back up. 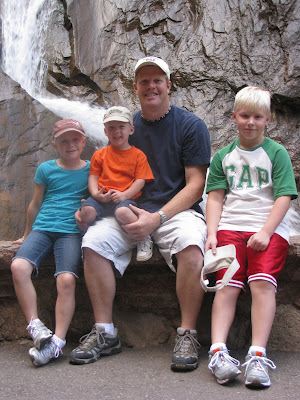 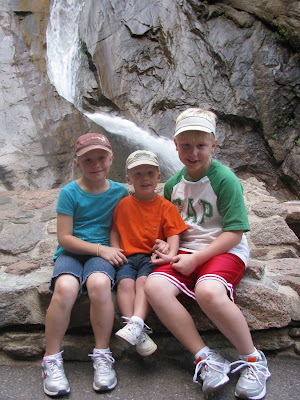 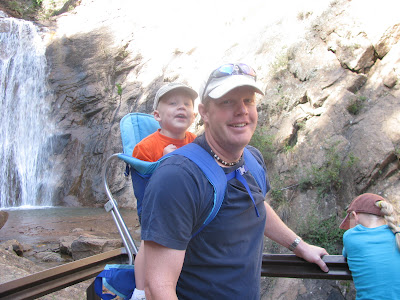 Base of Seven Falls 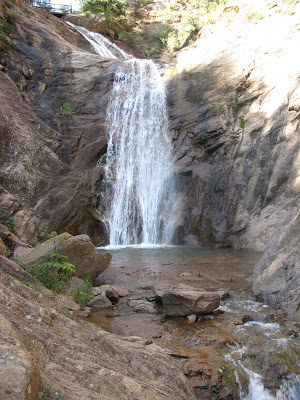 Brent and the kids at the top of first staircase overlooking seven falls. We did take the elevator down! 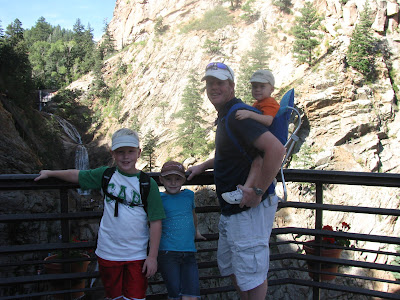 View from the look out of Seven Seven Falls 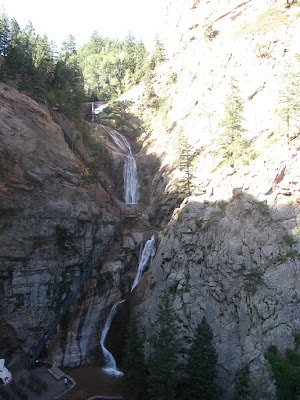 Owen throwing one of many fits! Not wanting to go up the steps. I think it says 196 steps. But didn't really want to ride in the backpack either! 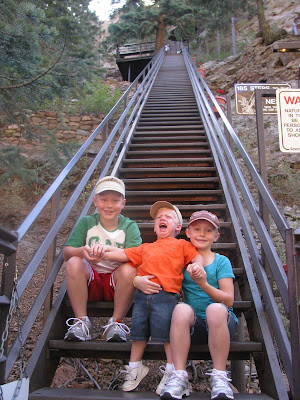 The start of the adventure. 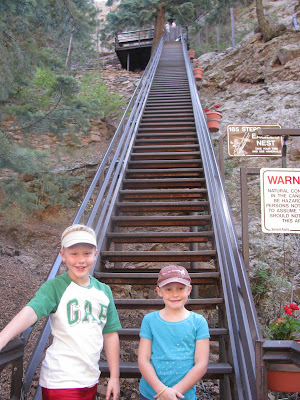 After 7 falls we went back and checked out of hotel. Grabbed some lunch and then checked into the cabin. First off let me say this cabin was one I found on short notice via internet and through CO Springs Chamber office. As Brent was driving closer to Manitou Springs, our little navagition "lady" kept saying we were getting closer. The buildings were not looking good. I mean they were scary. You know the ones that say 50 bucks/week scary. I'm starting to panic thinking I've made a huge mistake. Can we get out of the minimum 3 night stay??? Can we just cancel, it before 4pm? But low and behold between 2 "sites" there set the Timber Ridge Lodges. They were only 2 miles from our orginal hotel. Very nicely located. Still close to everything. Very relieved. Our cabin had 1 bedroom w/queen bed, pull out futon in L.R. and 2 bathrooms. Plus a little kitchenette, with 2 burner stove fridge, microwave. Again not fancy, but for the price, fit our needs. Our neighbors were from Wellsville, KS (by lawrence) and then the next 2 cabins down were people from KS too. It even had a pool.(which was FREEZING) and a little playground. We got settled into the cabin, again O needed a nap, and the kids went swimming. That night we went to the FLYING W Ranch. (this was not cheap either, but fun) This was a pioneer town again with different buildings set up as a town, BUT you got supper w/your ticket. A BIG Supper. All 3 kids got the same amount as the adults. It was bbq chicken or beef, HUGE baked potatoe, baked beans, homemade biscuit, homemade chunky applesauce, spice cake and coffee tea water. Served all on tin plates and cups. Very cool, They feed an average of 1000 people a night. I think they said there were 800 people the night we were there. (I can't believe I didn't take any pictures of that), Plus they had a ranch band that played after supper. We didn't last through that. A very good day was had by all!